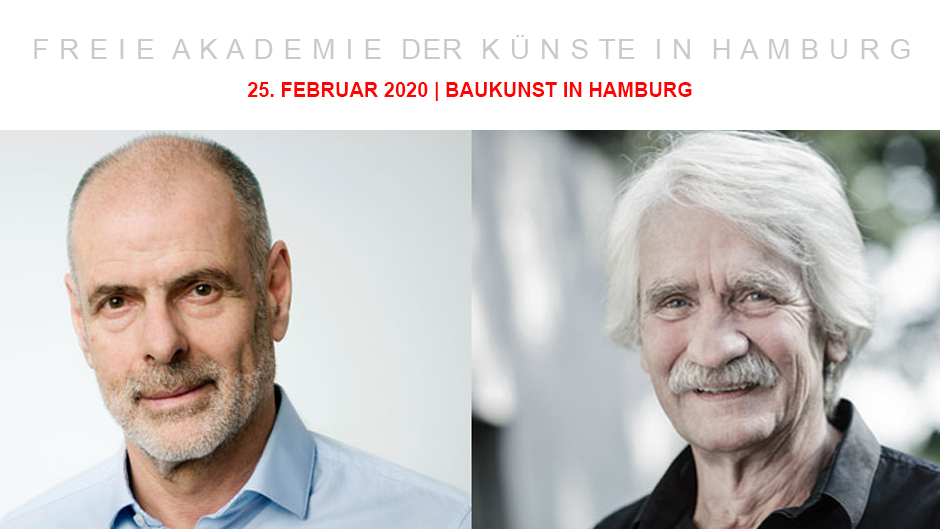 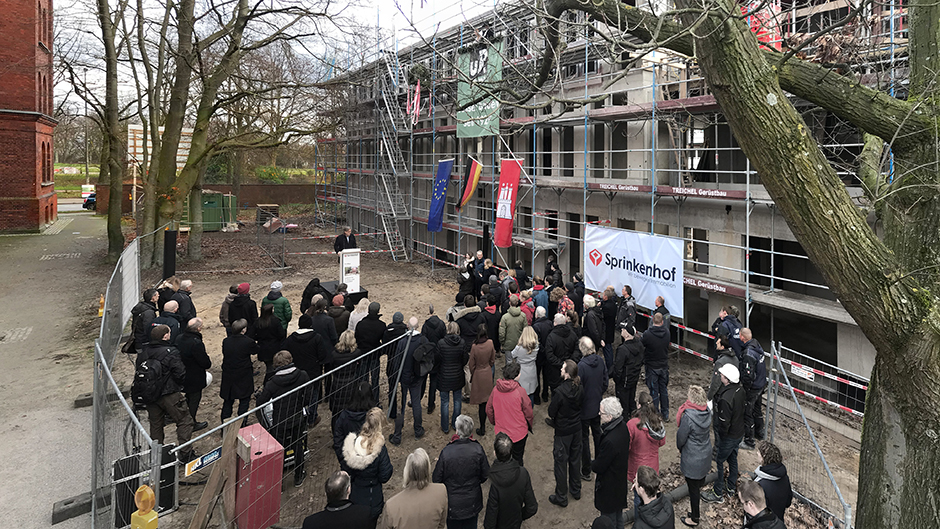 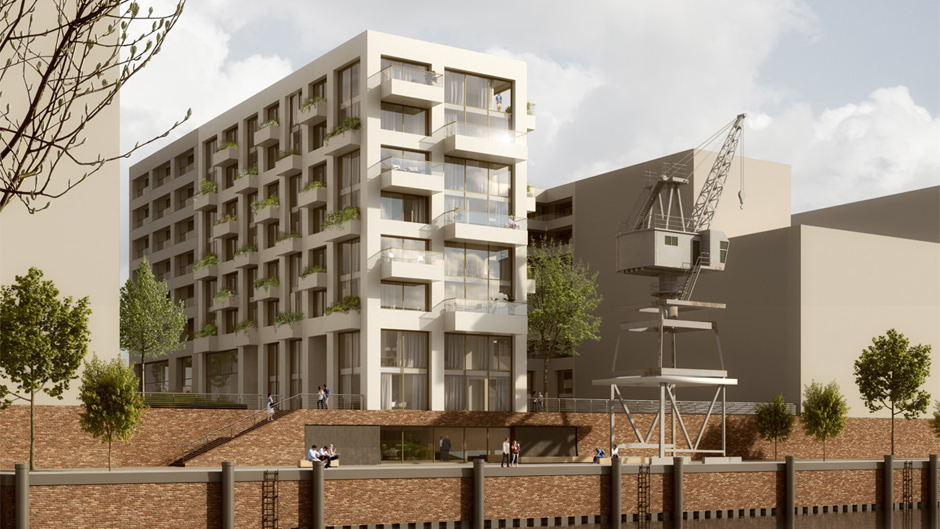 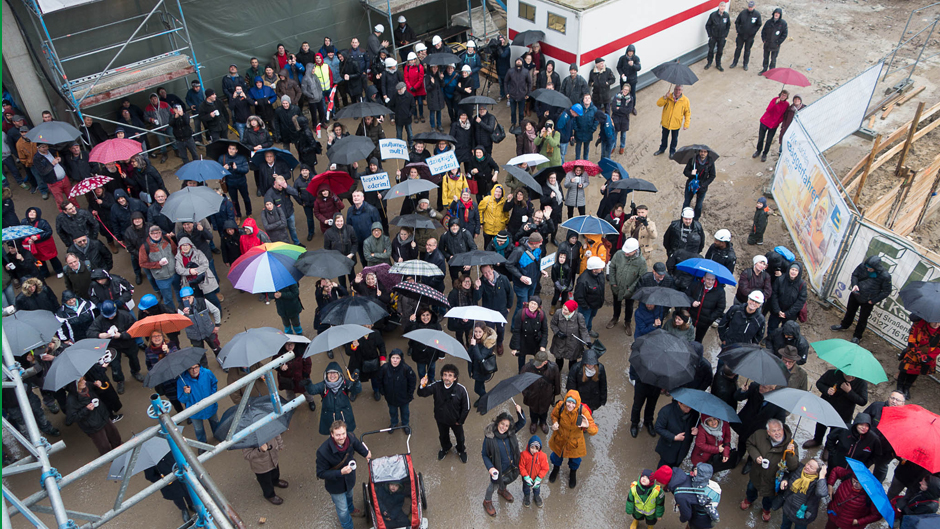 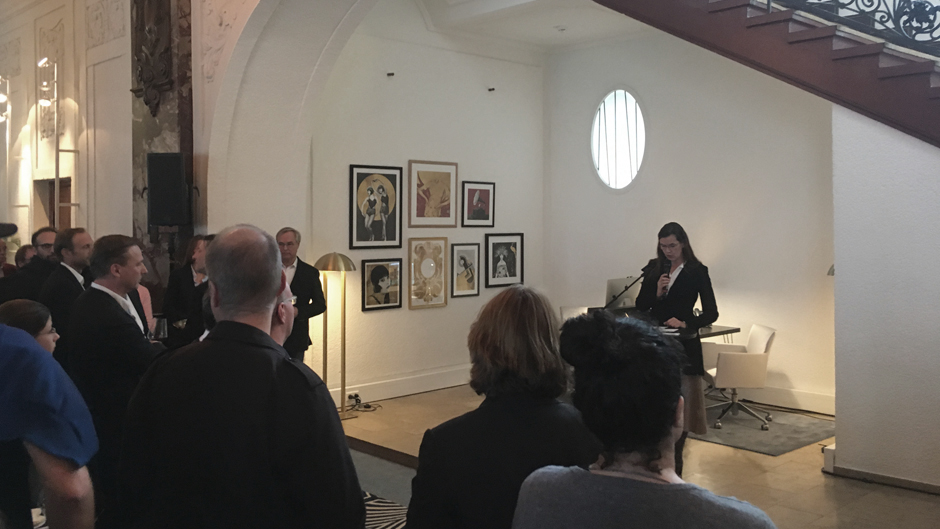 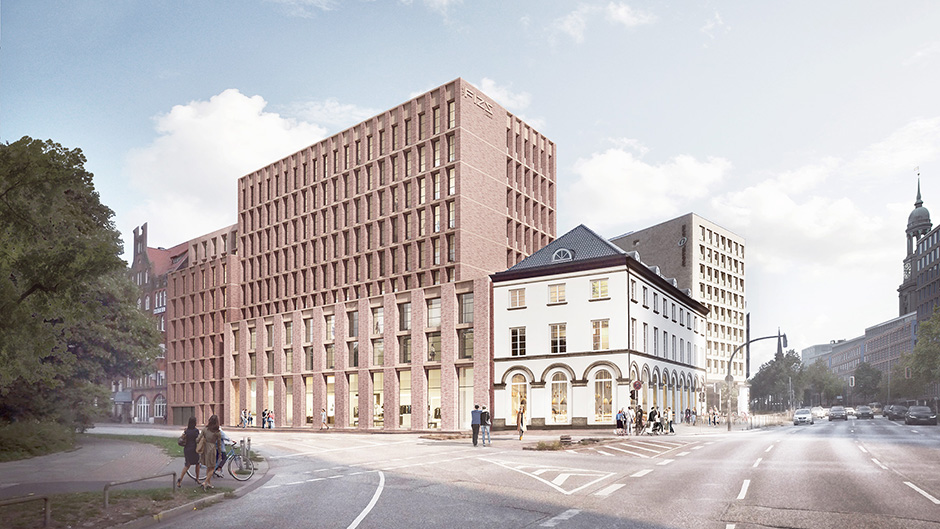 10/2019 DFZ wins 1st prize in competition for design of The Fizz Masters, Holstenwall with seven participants
With its design for this building ensemble, DFZ references the very different styles of the existing surrounding buildings, interpreting them in a contemporary manner with a clear design concept.read more 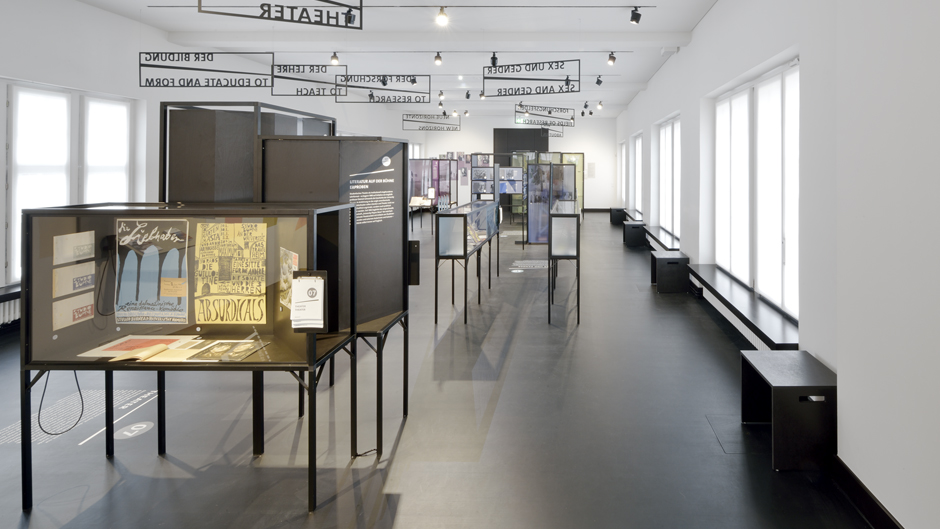 09/2019 Exhibition on the History of the University
On Tuesday, 24 September, the University of Hamburg opened not only its new permanent exhibition “Stories from 100 Years of Research, Teaching and Education”, but also its new premises. The former office and storage areas in the main building were expanded by DFZ and supplemented by sanitary facilities and barrier-free access in addition to the exhibition space. read more 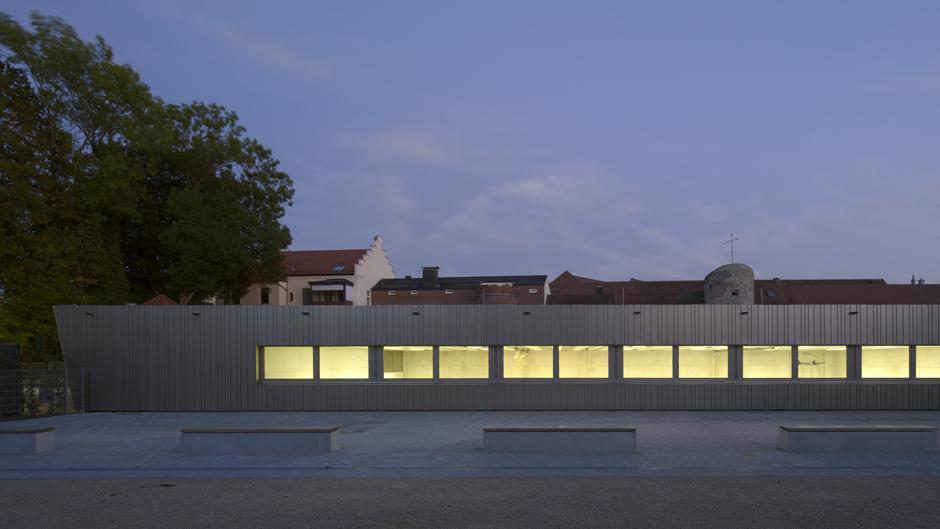 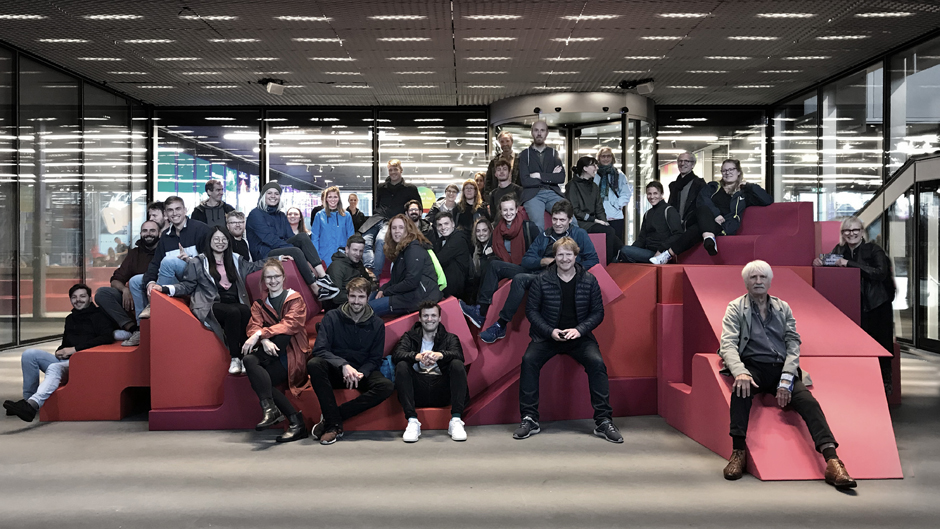 09/2019 Office trip to Copenhagen
The DFZ team had four interesting, eventful and funny days in Copenhagen. 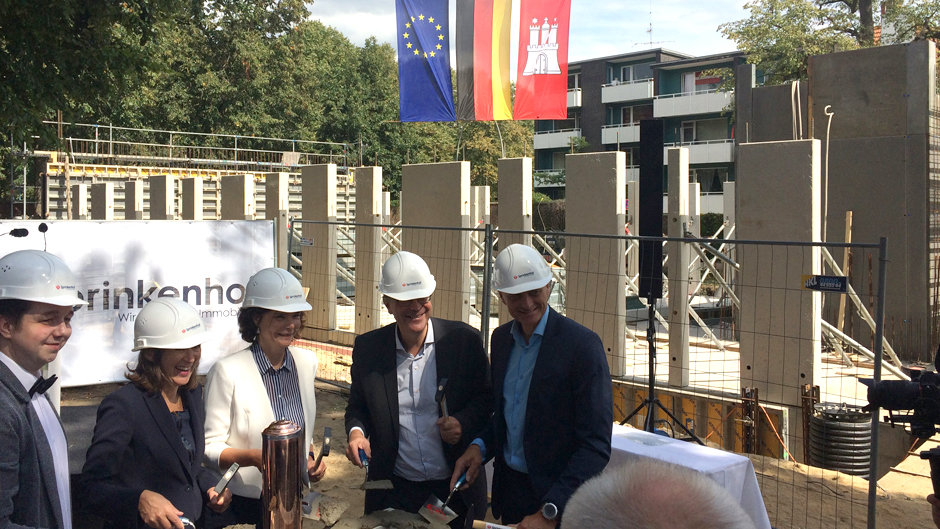 08/2019 Laying of the foundation stone for the Center for Studies and Doctoral Studies
On 20 August, the foundation stone for the Centre for Studies and Doctorate was laid on the university campus of the TU Hamburg-Harburg. The long-awaited official go-ahead has now been given for the three-storey new building, which is intended to optimise the students’ working opportunities and improve the conditions for doctoral funding. read more 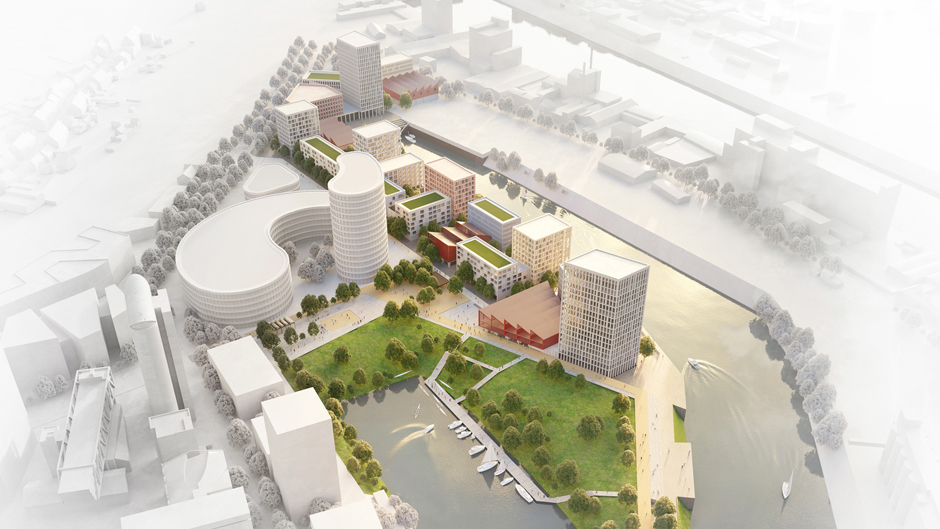 06/2019 1st prize in two-phase competition for the development of Halbinsel Kesselstraße in Düsseldorf’s harbour district
The urban design by DFZ Architects and Atelier Loidl envisages the development of qualitative open spaces with a strong relationship to water as well as a new combination of typological building components discovered at the adjacent media and business harbours. read more 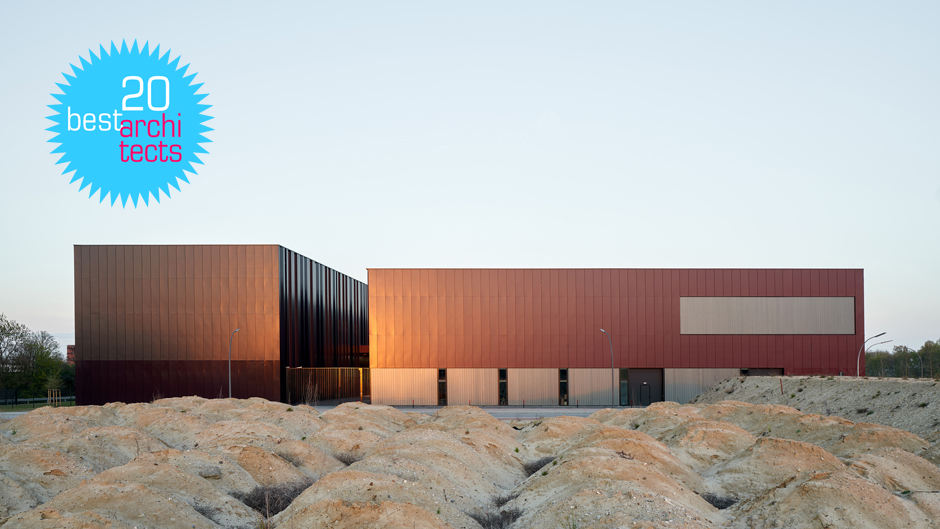 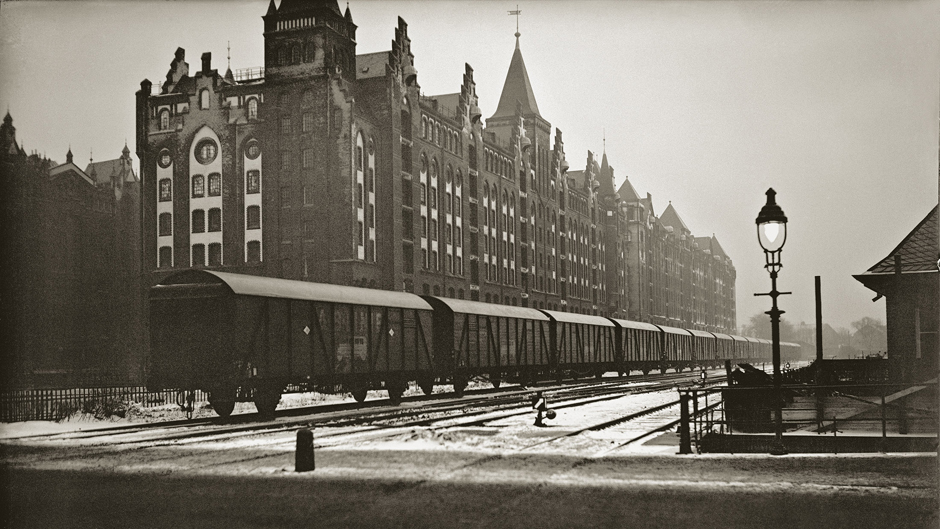 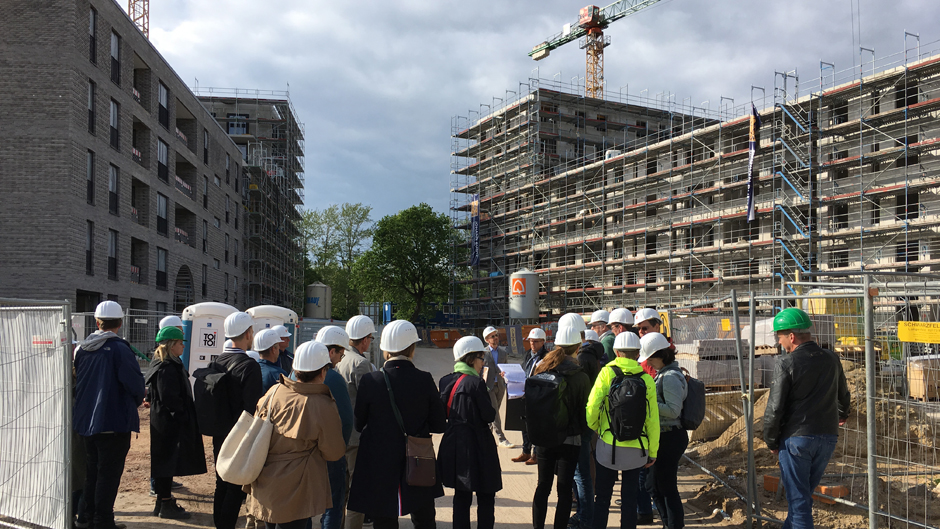 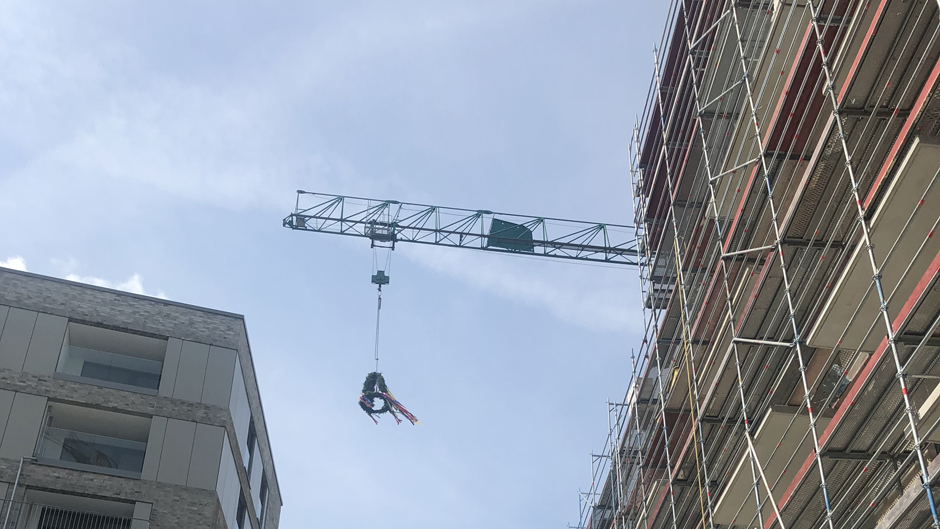 05/2019 opping-out ceremony Neue Mitte Altona Block 02
On 23 May, the residents of the Villekulla building group and those involved in the construction celebrated the topping-out ceremony. The project is part of the development of the first phase of the “Masterplan Mitte Altona”, which was approved by the Hamburg Parliament in 2012. read more 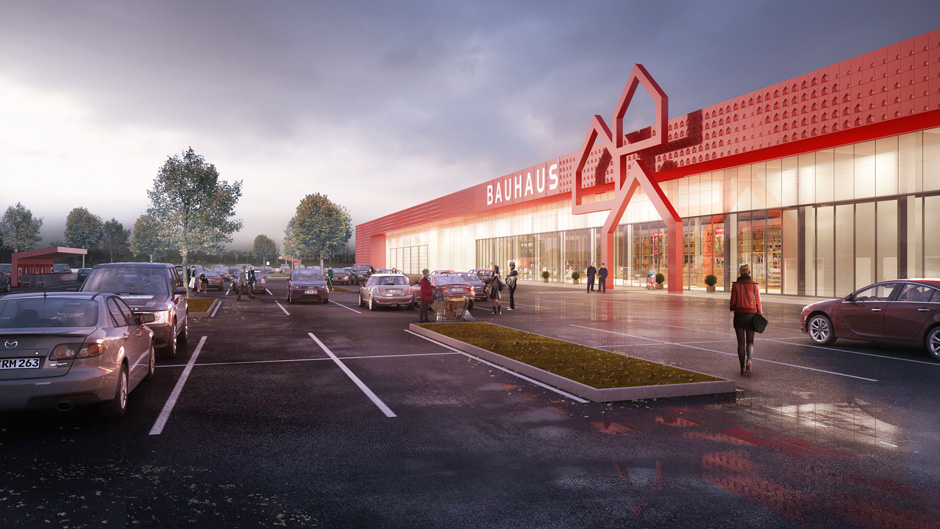 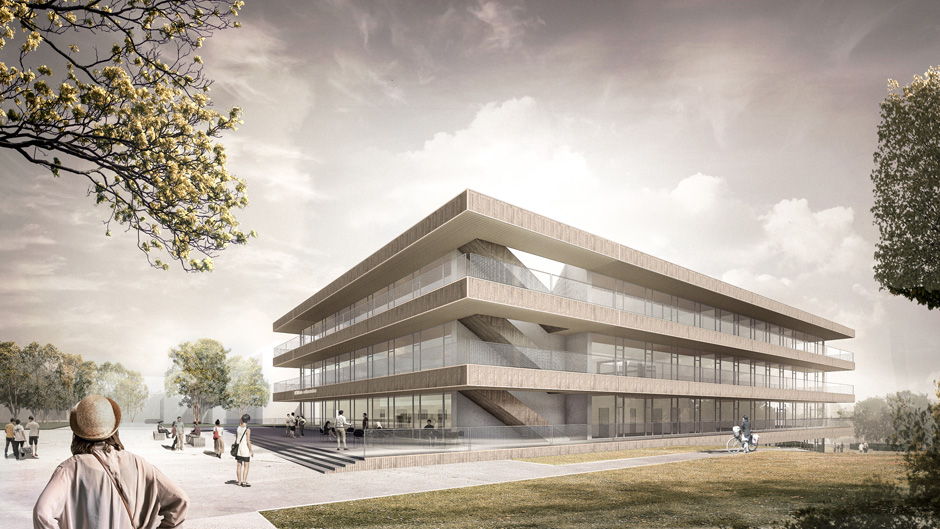 03/2019 2nd prize in the restricted realisation competition with 16 participants
On 29 March, the results of the restricted competition “New construction of a teaching and learning centre for the RheinMain University of Applied Sciences at the Kurt-Schumacher-Ring campus in Wiesbaden” will be announced at the press conference in Wiesbaden. DFZ Architects receive the second prize. read more 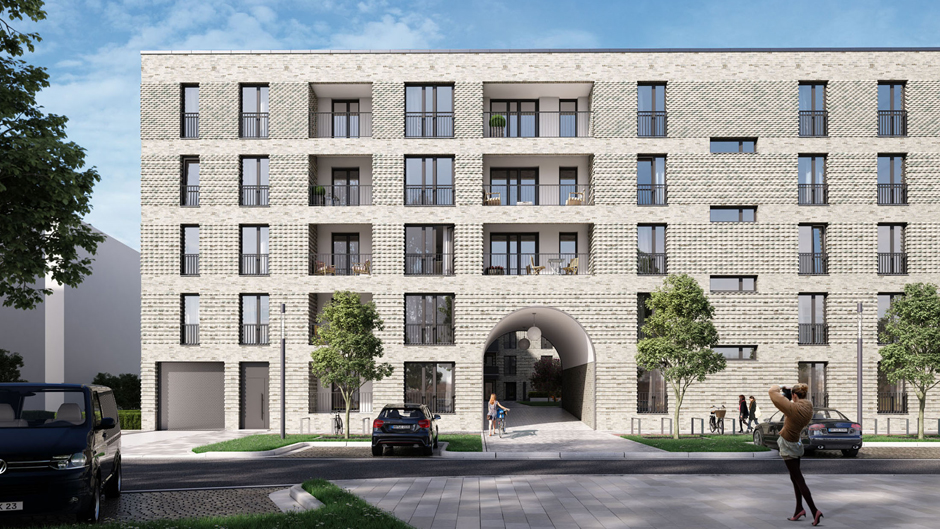 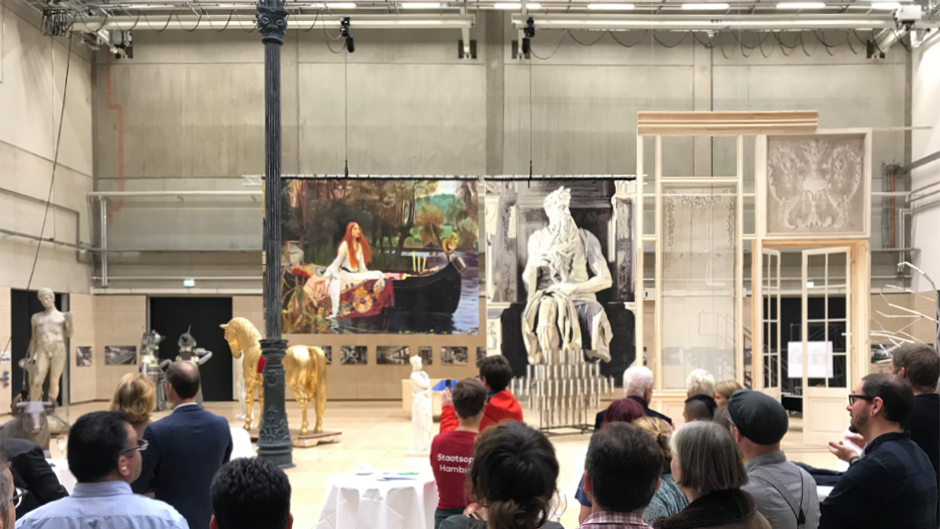 11/2018 Opening of the Opera Workshops and Fundi of the Hamburg State Opera
On 14 November, Mayor Peter Tschentscher and Senator for Culture Carsten Brosda officially inaugurated the new premises of the State Opera in Rothenburgsort. read more 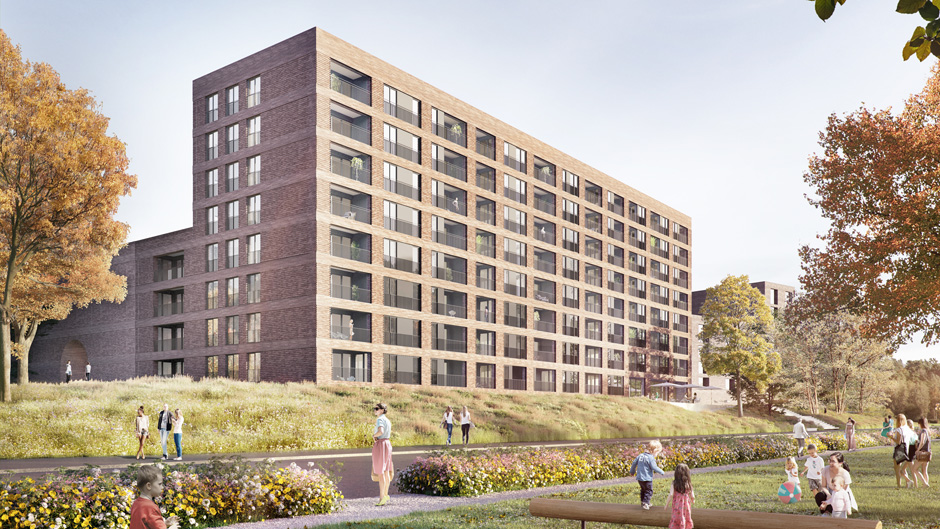 08/2018 1st prize in urban design competition for the Pergolenviertel in Hamburg
DFZ Architects has won first prize for its design of an up to eight-storey high building which marks the beginning of the new ‘Pergolenviertel’ in Hamburg. read more 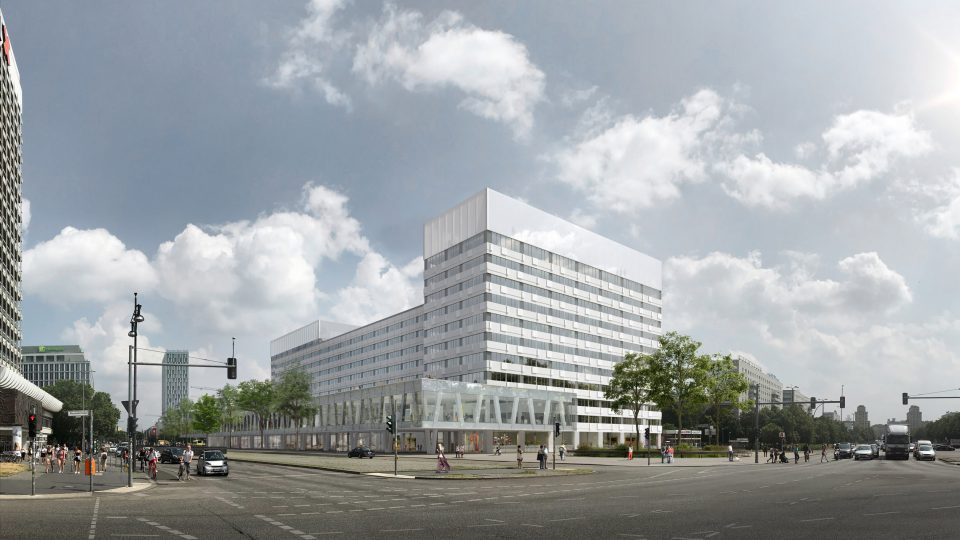 08/2018 2nd prize in the open competition for the realisation of the House of Statistics in Berlin
In a 2-phase realization competition with 81 participants, DFZ Architekten was awarded second prize for the design of the façade and the urbanistic rounding off. read more 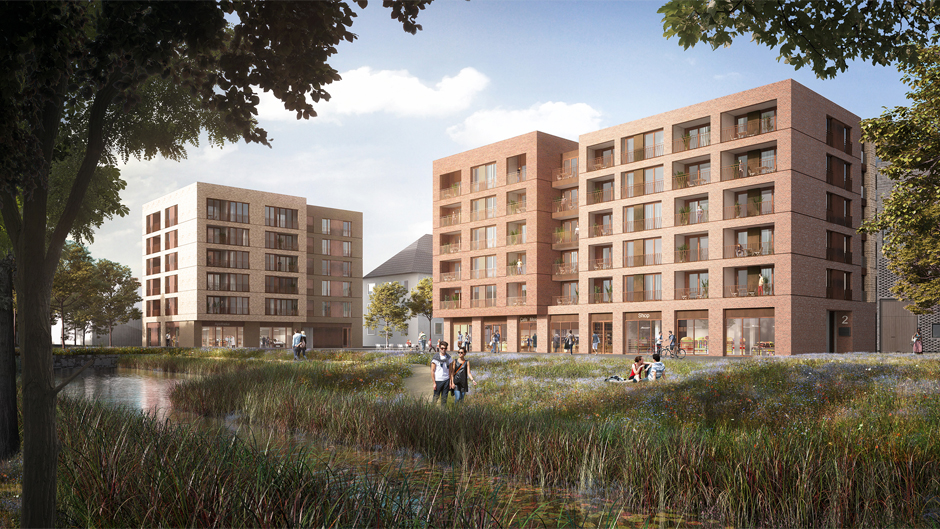 04/2018 1st prize in the invited urban planning and building construction appraisal procedure in the Jenfelder Au
DFZ Architekten is awarded first prize for the residential building design on the central square of the Jenfelder Au. read more 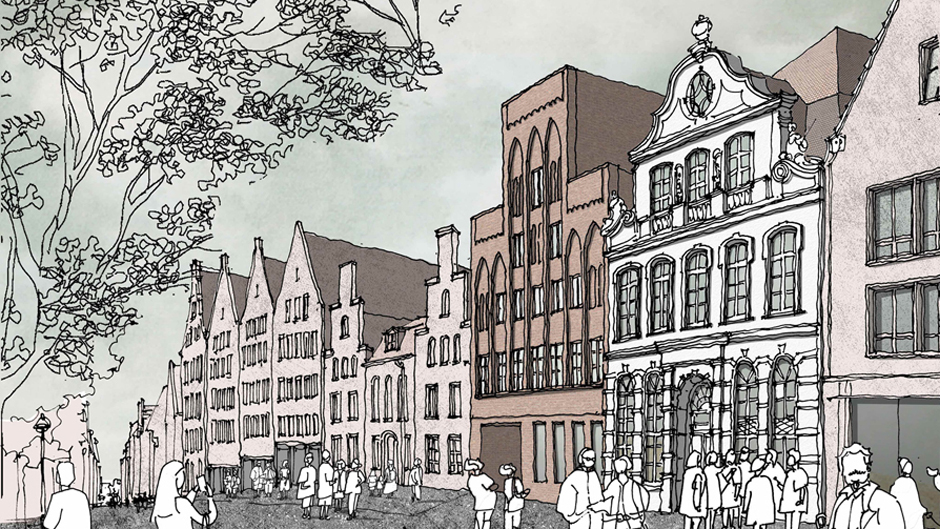 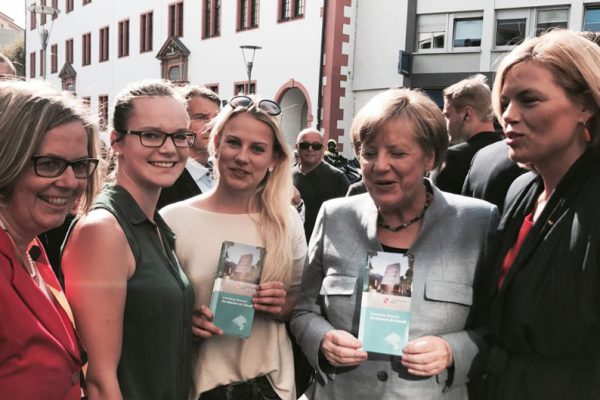 09/2017 A new fan of the Gutenberg Museum
Angela Merkel during the election campaign at the market place in Mainz, together with the regional chairwoman Julia Klöckner and the CDU constituency candidate Ursula Groden-Kranich. Read more 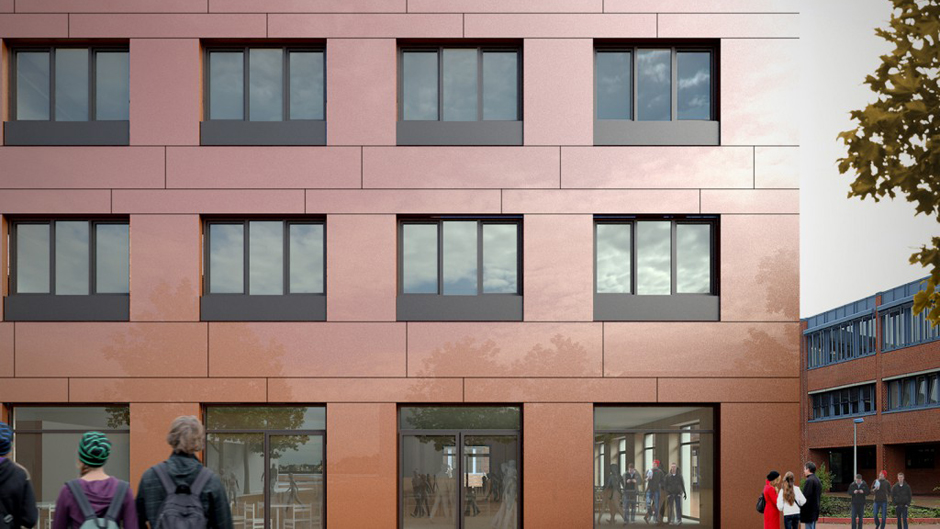 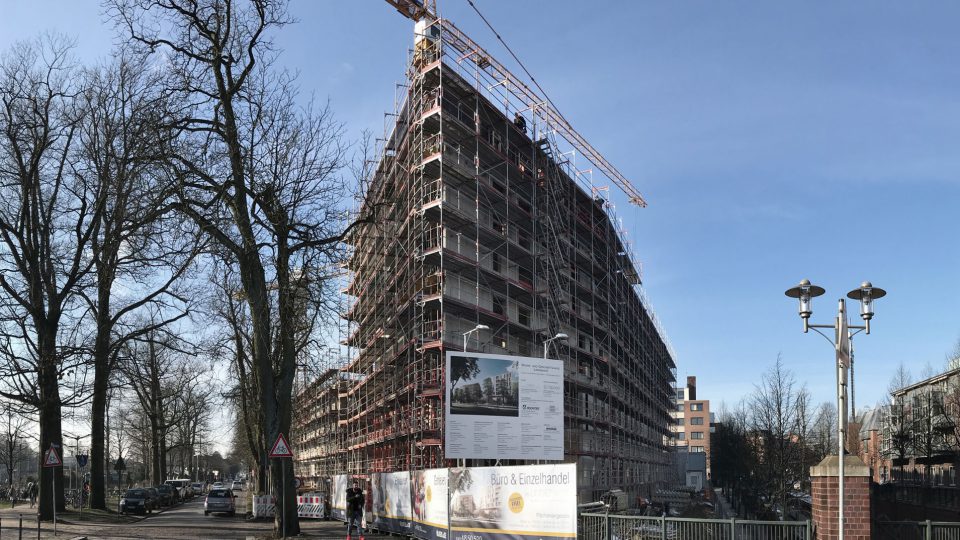 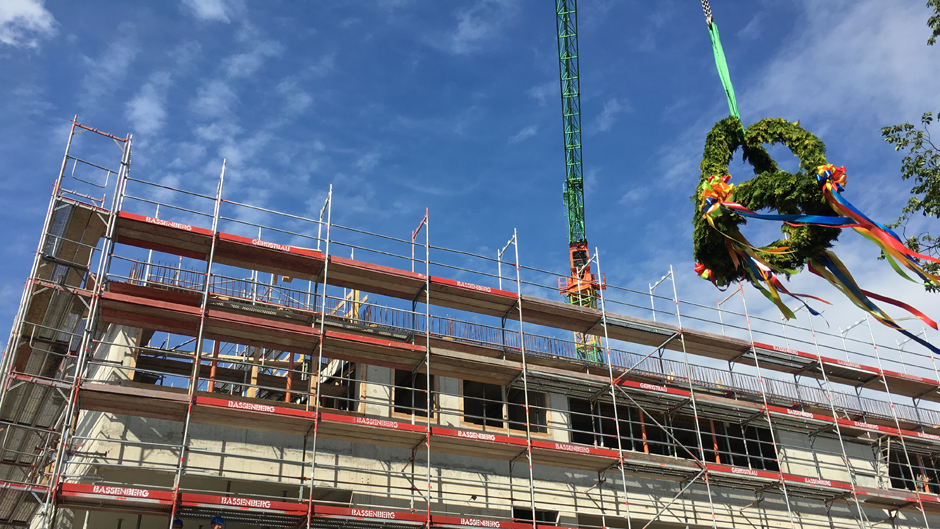 06/2017 The Goldbach school centre celebrates its topping-out ceremony.
Work on the shell will be completed by the end of the month. read more 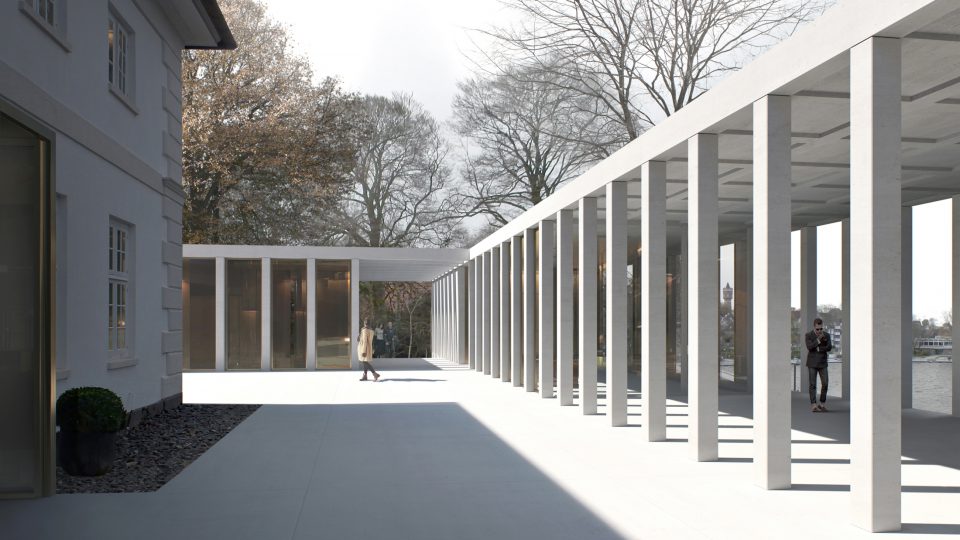 05/2017 2nd prize in the non-open architectural competition for the realisation of the historical riding hall Eutin with 13 participants
On the edge of the old town, in direct proximity to the Eutin Lake, lies the listed riding hall, the former Marstall of Eutin Castle. It is to be renovated, converted and extended for future use for events. read more

04/2017 Tina Saaby Madsen in conversation with DFZ Architekten
On 6 April, the responsible city architect of Copenhagen, Tina Saaby Madsen – known as a pioneer in climate protection with plans to create a CO2-neutral city by 2025 – meets DFZ Architekten. The theme of the event with the Danish delegation is cooperation, planning and building for assemblies, a grouping of building owners for the execution of a construction project that is still quite unknown in Denmark. The venue is the common room of the Dock 71 construction project in HafenCity Hamburg, which was completed by DFZ Architekten for a building group represented by Conplan at the end of 2016.

11/2016 Idea screening at Weissenberge: DFZ wins the contract
Within the scope of an idea screening by SAGA, the new residential quarter Am Weißenberge in the north of Hamburg is to be expanded. read more

10/2016 2nd prize in the non-open two-phase planning competition “Wohnen am Hartenbergpark” with 16 participants
A new residential quarter is being built on the site of a former school campus in the immediate vicinity of Hartenbergpark. DFZ receives second prize for its design. read more

07/2016 2nd prize in the non-open facade competition for the Ikea furniture store in Karlsruhe
The planning envisages a façade interplay of metal panels arranged in varying densities, which is derived from a bar code. Depending on the location and the different shadows cast by the slightly offset surfaces, the appearance changes over the course of the day. read more

06/2016 Inauguration of the new residential quarter Oxpark by mayor Olaf Scholz
On 27 June, Mayor Olaf Scholz will open the new residential quarter for people with mental illness in Hamburg-Langenhorn. A total of three residential buildings will be built on the site – two by the Protestant foundation “Rauhe Haus” and one by the association “Freundeskreis Ochsenzoll” – as well as a pavilion which will serve as a neighbourhood meeting place for the residents. read more

05/2016 3rd prize in the non-open two-phase realization competition “Living at Kurt-Schumacher-Ring” in Wolfsburg-Detmerode
The task of the competition, in which the DFZ design was awarded third prize, was to develop a replacement for Paul Baumgarten’s stepped high-rise. read more

02/2016 1st prize in the restricted planning competition for the Gutenberg Museum in Mainz
At the end of a Europe-wide, two-stage competition with 27 participants, DFZ is awarded first prize for the rearrangement of the exhibition and functional areas and an extension of the Gutenberg Museum, centrally located in the old town of Mainz. read more

11/2015 1st prize in the Hamburg-Kirchwerder urban development and open space planning workshop procedure
The urban design of a new residential quarter and a district school in the outer district of Kirchwerder mediates with its conceptual contents between the openness of the landscape structure and the village character of Kirchwerder. read more

08/2015 Fieldsoccer Tour 2015
After a sweaty effort, DFZ Architekten can be celebrated as the winner at the established Kleinfeld football tournament between architects and companies in the industry.

08/2015 2nd prize for the new construction of a community center and a day care center for children in Hamburg Wilhelmsburg
DFZ Architekten is awarded 2nd prize in a restricted competition for the construction of a community centre and a day-care centre for children at the Ev.-luth. Emmauskirche in Hamburg Wilhelmsburg. read more

02/2015 2nd prize in the building construction competition for the restructuring and expansion of the Goethe School Harburg
The design by DFZ Architekten convinces by the careful integration of the new building into the existing structure and the close interlocking with the existing building. At the same time, the design creates identity and is highly recognisable. read more

12/2014 Completion of the Rumond-Walther-Haus in Hamburg-Ottensen
The construction work of the nursing home is completed and the first residents move into their rooms. read more

11/2014 1st prize in a restricted competition for the new construction of a 3-stage secondary school
DFZ Architekten receives first prize for the design of a new building on the Goldbach school site in Langwedel. read more

09/2014 1st prize in the non-open, urban planning and building construction competition Lindenhof Ahrensburg
DFZ Architekten wins first prize for the design of a new building with apartments, service and commercial units on the edge of Ahrensburg city centre. read more

06/2014 Completion Ikea Altona Hamburg
After a construction period of 18 months, construction work in the Grosse Bergstrasse in the direct vicinity of the Altona train station is completed and the first inner-city Ikea specialty store celebrates its opening. read more

04/2014 1st prize restricted competition Haus der Kulturen der Welt, Berlin
DFZ Architekten prevails over four other architectural firms in a competitive process and wins the competition for the restoration and modernisation of the House of World Cultures in Berlin, popularly known as the “pregnant oyster”. read more

04/2014 Topping out ceremony Rumond-Walther-Haus
As a result of a structural design competition with eight participants, the new building of a nursing home for the elderly in Hamburg-Ottensen is being constructed. The topping-out ceremony was celebrated on 01 April. read more

03/2014 New website online
After the foundation of DFZ Architekten GmbH at the beginning of 2013 with the partners Peter Dinse, Johann Zurl, Nicolas Britsch and Stephen Kausch, our company now presents itself with a new image.